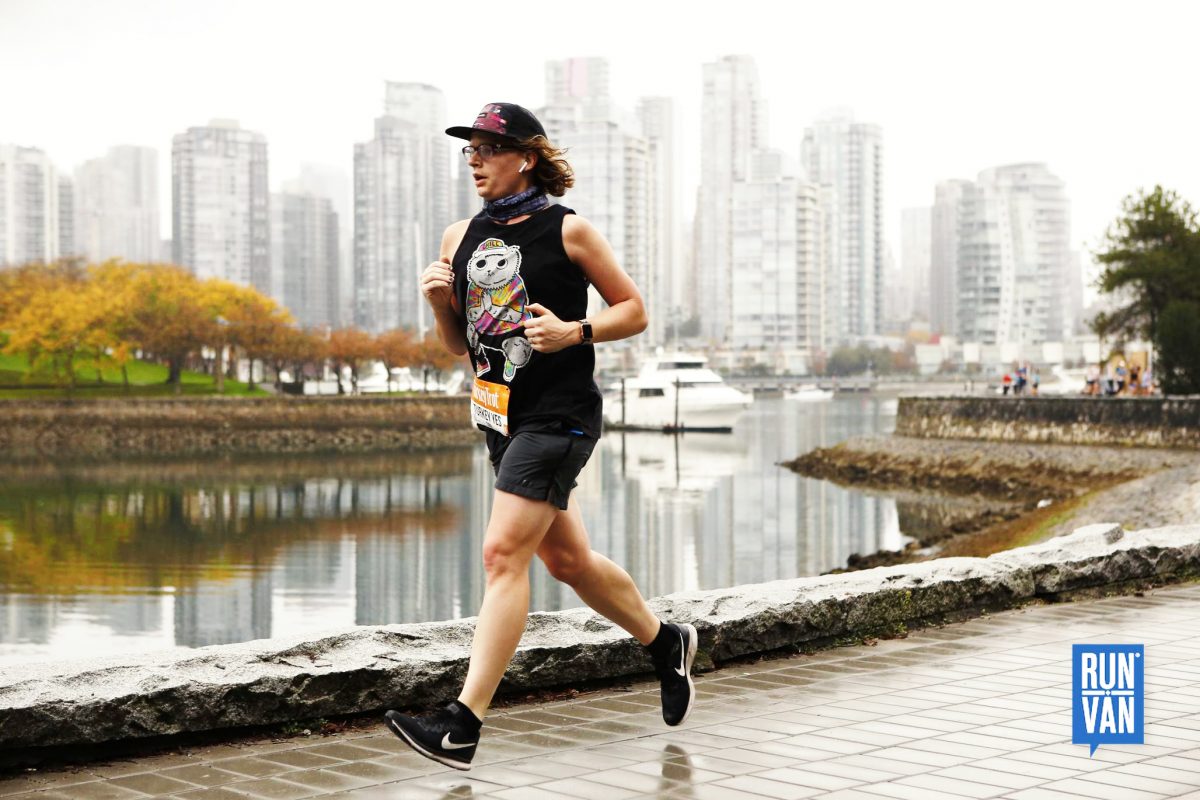 The 2018 Turkey Trot 10KM on Granville Island, BC was a fun, rainy race around Vancouver’s False Creek neighbourhoods.

I ran it last year, setting my 10KM PR, and I had a great time. I had no expectations that I would come anywhere close to matching that performance (and I didn’t, and it’s fine), but it’s such a nice course that I was glad to revisit it at a more relaxed pace. It’s also part of the RUNVAN Hat-trick series, and I want that swag in November!

I didn’t do any specific training for this race, other than the weekly 12 – 14 miles I’ve been logging to maintain my 1,050 mile goal for the year (scaled back a bit from the 1,200 I was optimistically aiming for back in July).

Just as I did last year, I drove to a parking lot just outside of Granville Island and walked over to the expo and package pick-up. Parking is free for racers on Granville Island itself, but that place is a nightmare to drive around on.

This was a relatively short run with easy access to pre- and post-race resources, so I just wore what I usually have for a training run.

I also had a backpack with my pre-race sweater, wallet and car keys. I left this at gear check and picked it up afterwards with zero wait.

I had a Starbucks oat bar and a tall coffee with cream 45 minutes before the race, which was more than enough to sustain me. I nearly DNS’d, though, because the night before the race, I’d gone absolutely hog wild on roti canai and sambal green beans from Banana Leaf. It was a late dinner with Tandye and Carlos, well-deserved after a long day running a table at the Vancouver Halloween Expo, and we were all ravenous. I definitely over-ate, and felt extremely nauseous on race morning. I was feeling much better by the time I got to the expo, but I really need to develop some self-control!

I shuffled my “Big Idiot Run Bin” playlist right from the start, eschewing my usual first mile of silence in favour of tracks by The Prodigy, Knife Party, Dilemn, Nine Inch Nails, Pirate Robot Midget and State Of Mind.

The RUNVAN team are experts at these events. I showed up at the expo 45 minutes before the race started and had my bib on and my bag checked within 10 minutes. At the start/finish area and on-course, all of the volunteers were cheerful, despite the rain.

There were two aid stations with water on the course, and plenty of signs and marshals to keep runners on the right path.

One suggestion if you’re thinking of running this event: settle your bathroom business before you get to Granville Island. The lines for the toilets – the many portables and the ones in the Performance Works building that hosts the expo – were the longest I have ever seen. There were still dozens of people waiting as the race started.

Almost all of the 10km course will be familiar to anyone who runs a lot in Vancouver. It’s a clockwise loop that starts on the eastern end of Granville Island, leads over the Burrard Street Bridge, then hugs the Seawall east through False Creek, going past the many parks and condos on either side of Science World. The finish line is back on Granville Island, somewhat anti-climactically tucked away amongst the trees in Sutcliffe Park.

I ran the whole race without paying attention to my Apple Watch, so I had no idea what my pace was until I finished. During the run, I felt as though I was applying roughly 80% of my max effort, which felt comfortable and sustainable over the distance. I could have hit it harder, but environmental factors (rain fogged up my glasses and made some of the course a bit slippery) and my overall desire to just finish well and not race my 2017 self kept me in check. Despite it being a slower effort, it felt like a more satisfying run overall.

If you can stay alert through the narrow sections and navigate your way through the crowd of fellow runners during the first half-mile on Granville Island, you should have no trouble setting a PR on this course. Even if you’re just out for a relaxed 10km jog, you’ll have a great time – the mix of urban and marine scenery is gorgeous!

Once you cross the finish line, I recommend snagging your medal, a coffee and some food (the chilli they serve in the food tent is quite good) and then get your gear and head west on the island as quickly as possible. Despite this race being held on Canadian Thanksgiving every year, the famous Granville Island Public Market is open and well worth a visit.

This year I went directly to À La Mode, where you can find enormous pieces of pie, fresh-baked and served by a trio of stern-faced women who move with the unhurried air of people who know their pies are absolutely worth $7 and a 10-minute wait for a single piece. I ate a piece of apple pie on the spot, and brought home lemon meringue and chicken pot pies for Tandye and Carlos.

There are lots of other things to see and do on Granville Island, but if you just want to head home and you parked on the island, make sure to give yourself extra time to navigate the pedestrian-choked streets.

Despite the well-run event and the lovely scenery, this race was a weird one for me. When I ran it last year, I unexpectedly maintained an average pace of 7:20/mile. I started HRT a month later. This year I was nearly 6 minutes slower, having lost a mile per minute off my pace. I went into the run knowing that I shouldn’t expect to get close to last year’s result, but the difference still felt like a huge gulf. It took a bit of post-race reflection (and apple pie) to remind myself that my pace in this year’s event was right in line with my current fitness, that I had more fun than last year, and that those 6.2 miles put me at 901 miles for the year so far. A good workout in a beautiful section of the city and a milestone on the journey to max out my distance are more than enough to cancel out any ennui I might have about what my pre-spironolactone self might have been able to accomplish. Plus, I got to deliver lemon meringue pie to the world’s biggest lemon meringue fan – that’s a reward on its own!

The Turkey Trot is a great excuse to get up early on a holiday and get a nice calorie deficit going before all that turkey and stuffing, and I will definitely be back again next year.